These two beautiful photos of Sparkle

were taken by another Poodle Lover.
Thank you to Elfi Redpath ewredpath@telus.net
for your talented eye and love for Poodles!!
~ * ~ * ~ * ~


Oceanside Kennel Club - Maple Ridge, B.C.
Sunday September 9, 2﻿007
﻿ Sparkle goes Reserve Winners Female on Thursday and Saturday.  Sunday under Judge Phylis Wolfish, Sparkle goes Winners Female and Best Opposite Sex for her first point towards her Canadian Championship Title.  Sparkle is being shown exclusively from the Bred By Exhibitor Class.
Judges comment: She is very pretty!!!
Sadly the competition had asked if we were showing today and pulled his bitch from showing.  Up to then the points for Winners Bitch were a 2 point win.  The games begin..........!
~ * ~ * ~ * ~

I have been showing other Standard Poodles in both Canada and the United States so....that means Sparkle has been the last on the pole so to speak for the show ring!
~ * ~ * ~ * ~

Shown under Judge Marilyn Mincey, Sparkle take Winners Female from the Bred By Exhibitor Class then places over the Winners Male for Best of Winners giving her a 3 point win with a total now of 4 points toward her Canadian Championship Title.  Judge comment:  She was moving out nicely.  Good topline. Very pretty face.
~ * ~ * ~ * ~

This weekend I was not feeling well and had missed the previous two show days.  No one would let me miss showing to Frank Sabella for today with Sparkle!  Dang good thing I dragged myself up and at it!!!

Winners Female, Best of Winners and with a very lovely compliment for consideration of Best in Breed, Sparkle goes Best of Opposite (over 2 Specials) to the #2 Standard Poodle and Non-Sporting Dog in Canada from the Bred By Exhibitor Class.  ﻿﻿
Frank Sabella gave us every opportunity for Sparkle to get "it" together as she was being a little too full of herself.... not poodley but spoiled.....not Sparkle!!!  That`s what happens when you are working with everyone elses and not your own so you end up running into the ring thinking ...when was the last time this little silver spark on a show lead........?  It was such a great consideration just a hair off for the breed.

This was a 4 point win putting Sparkle onto 8 points now.

Lower Mainland Dog Fanciers of B.C.
Friday February 29, 2008
﻿﻿Showing from the Bred By Exhibitor Class, Sparkle places for Winners Female and takes Best of Breed for a 2 point win making her a
New Canadian Champion!
She also goes Best Bred By Exhibitor.
~ * ~ * ~ * ~

Winners Female and Best of Opposite Sex for 2 security points on Sparkle.
She also took Best Bred By Exhibitor.
Posted by Violet at 11:14 PM No comments: 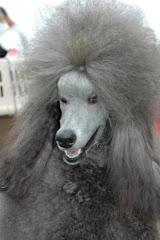 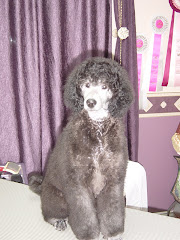 A little static while tent camping in Kelowna, B.C. 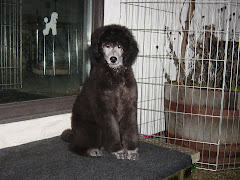 Photo of Sparkle at 3 1/2 months old taken by myself on the back step of our house. Note Poodle reflector on glass door for Puppies to slow down to see glass! (WARNING - DO NOT look at Poodle nose prints on glass it will cause eye strain!!!) 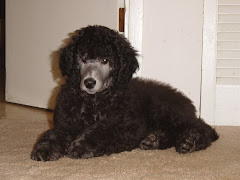 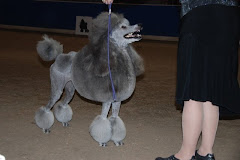 Sparkle has started her way onto her American Championship from the Bred By Exhibitor Classes!

Security Points for your Championships

It has been advised by many others from CKC Reps to fellow competitors to make sure one has "security points" on our dogs while going for our Championship points as we all know ''to error is human''. Sometimes time does not allow us to be able to confirm these points. I would hate to see someone take a Poodle that somehow needed only one little point however had already taken their Standard Poodle (especially) out of show coat. Poodles hair grows approximately 1/2" monthly.
I always have a winning photo with that Judge done to back up any questions pertaining to any points acquired. I also highly recommend all beginners and everyone showing to confirm your points at the Show Secretaries desk each day.
In the United States I caught an error and was asked to send the winning photo for confirmation. We learn how much those points costs us with entries, travel, hotels, gas, food on the road, etc plus all the hard work with training and coat care.